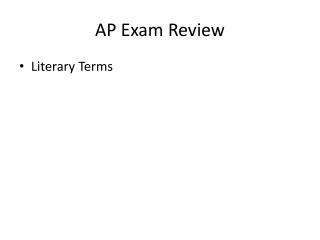 AP Exam Review. Literary Terms. Synecdoche. Figurative language in which part of the whole is used to represent the whole/entire object Car=“Wheels” King/Rule=“Crown” or “Throne”. Litotes. An understatement in which an idea is expressed by negating its opposite