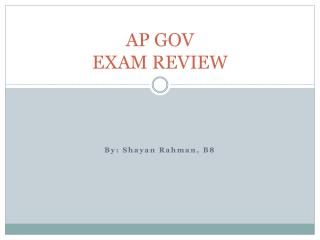 AP GOV EXAM REVIEW. By: Shayan Rahman, B8 . Implied Powers. Powers that are not expressed in the Constitution but reasonably suggested (by the expressed powers). This applies to the U.S. government because in case of an emergency it gives them the power to make laws and govern the people. Question 1 2005 AP Gov Exam - . by tim arakelian. question. the judicial branch is designed to be more independent of