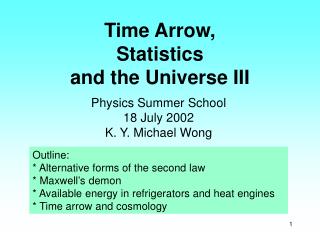 The Arrow of Time - . lecospa group meeting 19 october 2010. the arrow of time. the past is different from the future.

The Arrow of Time - . by robert nemiroff michigan tech. physics x: about this course. officially &quot;extraordinary

The “Arrow of Time” - . nearly all fundamental laws of physics are symmetric in time. a process which satisfies these

The arrow and the song - . by: jacob c ope. henry wadsworth longfellow. i shot an arrow into the air, it fell to earth, i

Where does the arrow of time come from? - . sir arthur eddington. m a. f. mekaniikka. sähkömagnetismi. termodynamiikka.