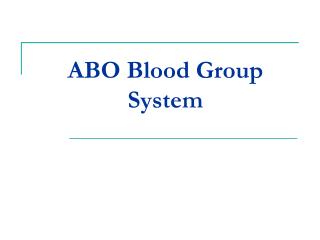 ABO Blood Group System. History: Karl Landsteiner. Discovered the ABO Blood Group System in 1901 He and his five co-workers began mixing each others red cells and serum together and inadvertently performed the first forward and reverse ABO groupings. Why is it important?.

The Circulatory System - . the heart, blood vessels, blood types. systemic circulation. with blood returning from the

Disorders of the Hematological System - . blood and lymph. two of the body’s most important functions are:

Which body system acts in a way similar to a transportation system? - . circulatory respiratory nervous excretory. which