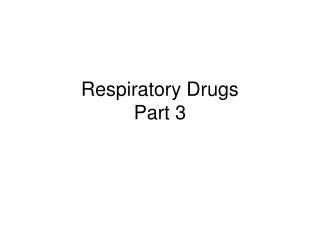 RESPIRATORY DRUGS - . dr. flor d. munsayac. bronchial asthma. a disease of the airways that is characterized by

Chapter 7 Respiratory Drugs - . ventilation. refers to the movement of air in and out of the lungs through a series of

PowerPoint Presentation Guidelines (Part 2) - . do !!. use the same background on each slide. don’t!. don’t use