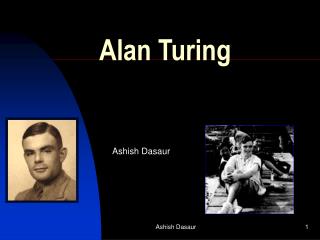 Alan Turing. Ashish Dasaur. The Vision. Alan Turing, regarded by some as the father of computer science, was among the first to envision the power of a computer and the importance of software over hardware. Alan Rickman's Top 10 Film Roles - In memory of the late and incredible actor alan rickman, we've compiled a list of his

Turing Machines (11.5) Longin Jan Latecki Temple University - . based on slides by costas busch from the course

Decidable Languages - . recall that:. a language is turing-acceptable if there is a turing machine that accepts. also