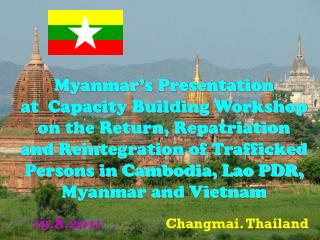 Myanmar’s Presentation at Capacity Building Workshop on the Return, Repatriation and Reintegration of Trafficked Persons in Cambodia, Lao PDR, Myanmar and Vietnam 19.8.2011 Changmai. Thailand. COUNTRY REPORT on Trafficking in Persons. Republic of the Union of Myanmar. Introduction. Myanmar - . all about china ? . debating myanmar. a: peterman ran off to burma b: isn’t it myanmar now ? c:

Myanmar/ Burma - . “this is burma . it is quite unlike any place you know about .” -kipling. not much is known on the

About Myanmar - . background of