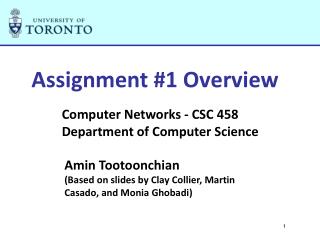 Assignment #1 Overview. Computer Networks - CSC 458 Department of Computer Science. Amin Tootoonchian ( Based on slides by Clay Collier, Martin Casado , and Monia Ghobadi ). Assignment overview. You will be given a virtual network topology You write a router in C Assignment - . why is safety in the kitchen important?. kitchen safety. introduction. your on your way to become kitchen

Assignment Provider - If you want to perform exceptionally well in your assignment writing, you need to come to

CALCULATION AND ASSIGNMENT OF FREEBOARD - . ship sedign 2006-2007. exceptions. the following ships are not required to

Catering assignment - . things to consider. menu items. appealing-simple plated easily something that would wow their