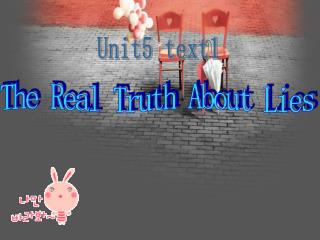 Unit5 text1. The Real Truth About Lies. Warm-up Activity. A story about white lie A boy and a girl were on a motorcycle, speeding through the night . They loved each other a lot. Girl: “Slow down a little, I’m scared.” Boy:“No, it’s so fun. ” Unit5 - . can you come to my party?. 1. make, accept &amp; decline invitations. reasons. 2. talk about obligations.

Unit5 Going shopping - . christmas is coming up. what presents do you want to buy for your friends ?. discussion. i want

Unit5 Ambitions and Dreams - . learn to talk about personality and jobs. practice talking about the future. language

Unit5 Look at the monkeys - . a let’s learn. what can the animals do? can you guess?. there is going to be a sports