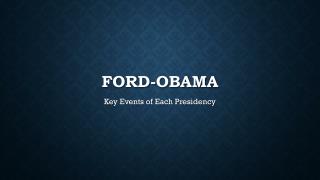 Ford-Obama. Key Events of Each Presidency. Gerald Ford. Gerald Ford became President after Nixon’s resignation He was a former star college football player, and fought in the Navy during WWII Ford’s first move as President was to pardon Nixon of his crimes