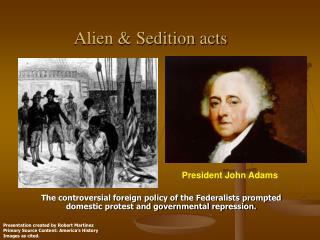 Alien and Sedition Acts of 1798 - What are they? the alien and sedition acts made it illegal for anyone to say anything

Question #1 Articles of Confederation Review - . use the diagram and your knowledge of social studies to answer the

Bell Work - . explain the details of the xyz affair. what were the alien and sedition acts? this day in history: april

Chapter 11: The Triumphs and Travails of Jeffersonian Republic 1800-1812 - . federalist and republican mudslingers. first

Republicans ’ main criticism of the alien and sedition acts was that they……. ? - Gave too much power to the

The Peaceful Transfer of Power: - . from john adams to thomas jefferson. the election of 1800. re-match of election 1796

Alien and Sedition Acts The Rights of states - . john adams. alien acts. definition: president could expel any alien or

Objective: To examine the XYZ Affair and the causes and effects of the Alien and Sedition Acts. - Objective: to examine

War of 1812 - . election of 1800. jefferson and adams at each others throats jefferson helped finance anti- adams

Jefferson Takes Office - . when jefferson becomes president in 1801, his party replaces federalist programs with his own.

What Were They Thinking?: The Alien and Sedition Acts - . by ellie depastino. objective. you will be able to describe the