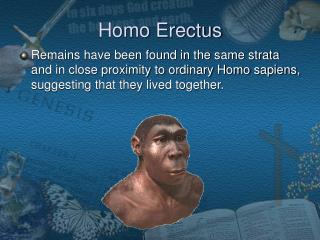 Homo Erectus. Remains have been found in the same strata and in close proximity to ordinary Homo sapiens, suggesting that they lived together. . Turkana 'Boy' WT 15000 in 1984 in Kenya. And Now You Know Why You Don’t See it Anymore. Well, mabye you do!. On to the Sideshow!. Nebraska Man.