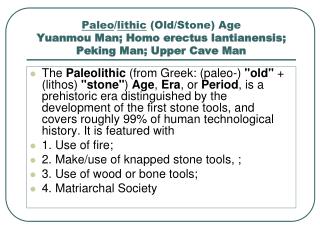 Chapter 5 - . macroevolution: processes of vertebrate and mammalian evolution. how old is the human species?. darwin’s

History of Technology - . how it has changed lives!. paleolithic 2.5 million years ago. use of fire unpolished stone

Cave men - . by yash dhutia and jamie sansom. what a cave man used to look