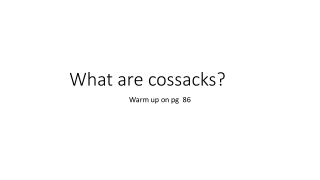 What are cossacks ?. Warm up on pg 86. Target. Know how Absolutist rulers keep their power  Be able to remember specific examples for Spain, England, France, and Russia Everest through Images - . the great trigonometrical survey of

Life in New France - . by grade 6t students. next. french – native relationships by erik by goran by alison by bray by

History Images - . for each image, state: what it is what culture it comes from its significance. image #1. egypt

Life in New France - Lecture outline. i. quebec and the fur trade (1608) the company of 100 associates (company of new

Life in New France - . what was new france?. new france was the area colonized by france in north america. it started in

Life in New France - . canadian history xi. key points in this power . i. quebec and the fur trade (1608) the company of