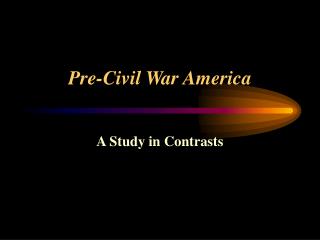 Pre-Civil war - Review and yet to cover. pre-civil war . pre civil war. economic divisions during the first half of the

Pre-Civil War South - . these competitions were called cakewalks because the prize was a

CAPTAIN AMERICA: CIVIL WAR - The upcoming movie is plotted uniquely where superheros are banned by u.s government and the

Post Civil War America - . problems, issues, and interpretations. dbq. in what ways and to what extent did constitutional

Post Civil War America - . immigration, industrialization, and child labor. 19 th century immigration to the us can be

Pre-Civil War, Civil War and Reconstruction Review - . why was slavery more dominant down south?. the north was more