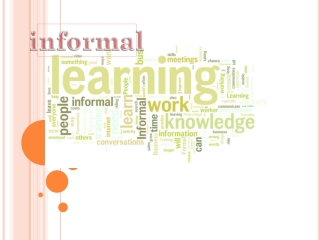 informal. Informal Learning is…. " any activity involving the pursuit of understanding, knowledge or skill which occur outside the curricula of educational institutions, or the courses or workshops offered by educational or social agencies.". Forms of Informal Learning. Informal Reasoning - . fallacies. ad ignorantiam : something is true on the grounds that there is no evidence to disprove

Informal Commands - Walk!. informal commands. sleep!. eat!. in spanish…. when we want to tell a friend to do something

Informal Learning - . we all do it. whether we realize it or not, we are learning all the time. chasing rabbit trails on

Informal Assessment - . week 4 wrapping it up putting it all together. informal assessment. other forms of informal

Informal Commands - . informal commands. to give a command in spanish, you must first decide whether you wish to use an

Informal Commands - Walk!. informal commands. sleep!. eat!. in spanish…. when we want to tell a friend, a pet or

“Informal” Policy - . if you don’t fail the attitude test, you will not get cited. campus dynamic. campus of 7000

Informal Sector - . ray way alberto navarro. what is the informal sector?. the economic activity that is not taxed,