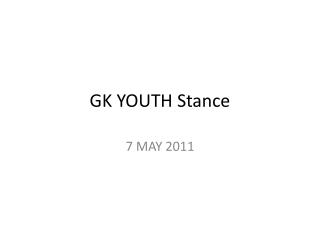 GK YOUTH Stance. 7 MAY 2011. What has happened. GK Philippines and other countries have separated GK and CFC ANCOP GK ANCOP Australia wanted to remain as the organisation here in Australia that would support both GK and ANCOP however this was not approved by Philippines RUNAWAY TEENS &amp; “Street Youth” - . lgbtq youth in trouble! what can we do to help?. answering needs. opening

CC200 Youth Justice - . the rise and fall of delinquency chapter one. the public issue. over the last twenty years, youth

Career Planning Begins with Assessment Meeting the Needs of Youth and Young Adults - . what this session will cover: .

Meeting the Educational Needs of Children and Youth Who Are Homeless or in Foster Care - . who are the children and youth