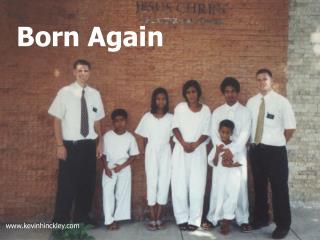 Born Again. www.kevinhinckley.com. True Story. A man came bursting into Brigham Young's office, crutches flying.  He only had one leg, and he shouted, "Now, Mr. Prophet, I want you to give me another leg this instant.  Otherwise, I will publish it abroad that you are not a prophet at all." Born again - . what’s the similarity between king solomon &amp; a cardiologist?. the heart of the matter is a

Born Again - . john 3-5. more religious descrimination. the founder of the jedi religion inspired by the star

Being Born Again - . john 3:1-15. jesus and nicodemus. you must be born again it is hard to understand the need to be

What is “Born Again?” - . can someone be born a second time? (bible verses from new king james version). an

What is “Born Again?” - . can someone be born a second time? (bible verses from new king james version). an

Born Again Identity II - . ephesians 1:8-14. he has given us a vision for life. paul begins this chapter by looking back

Ye Must Be Born Again - . a ruler once came to the savior by night to ask him the way of salvation and light; the master

Born Again of the Spirit - . purpose of the lesson: the joy of being born again faith killing strategies of the

Confessions of a born again candidate - . pat bell hm customs and excise. contents. how i came to charter doing it what i

Now That You Are Born Again - . in this book pastor shares truths that are fundamental to the christian faith which will