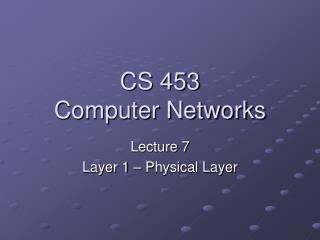 CS 453 Computer Networks. Lecture 7 Layer 1 – Physical Layer. Physical Layer - Layer 1 Real Networks for Real People. Recall that we said Layer 1 is about moving bits So we look at ways to move bits from one place to another without being concerned with higher level communications issues