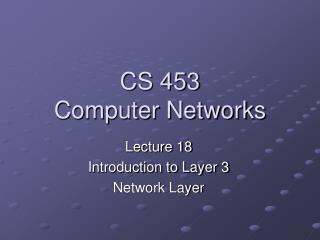 CS 453 Computer Networks. Lecture 18 Introduction to Layer 3 Network Layer. Network Layer. So far, our communications has assumed that everything is point to point… We have a message at A and we send it to B We had, in layers 1 and 2, channels that gave us a “connection” between A and B.