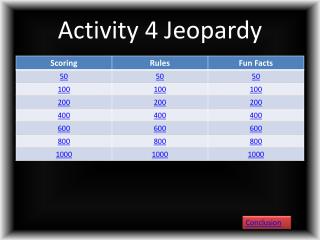 Physical Activity Jeopardy - . final jeopardy. a: any form of movement that requires energy . q: what is physical

Activity 4 - . what are rock units? rocks formed in large volumes during a specific process many different kinds of rock

Unit 4 Jeopardy - . choose a category. you will be given the answer. you must give the correct question. click to begin.

JEOPARDY Russia #4 - . by the numbers - 100. the number of five year plans it took for stalin to achieve