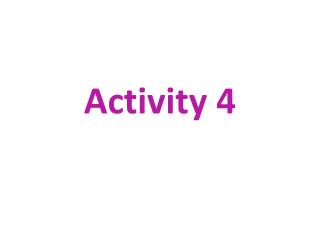 Activity 4 . What are ROCK UNITS? Rocks formed in large volumes during a specific process Many different kinds of rock deposits in an area that may have formed at the same time. How are Rock Units formed? Sediment deposition (sedimentary rocks) Activity 4 Problem - In chicago in the year 2000, there were approximately 1.053 million african americans, 907 thousand

4 Corners Activity - . world language professional development meeting september 13, 2013. for each of the following

Activity 2 - 4 - . family of functions. 5-minute check on activity 2-3. what is the formula for slope-intercept form

Activity 2 - 4 - . family of functions. objectives. identify the effect of changes in the equation of a line on its graph