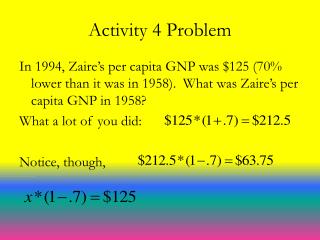 Activity 4 Problem - In chicago in the year 2000, there were approximately 1.053 million african americans, 907 thousand

Activity 4 - . what are rock units? rocks formed in large volumes during a specific process many different kinds of rock

Problem 4. - Problem 4. hydraulic jump. problem. when a smooth column of water hits a horizontal plane, it flows out

4 Corners Activity - . world language professional development meeting september 13, 2013. for each of the following