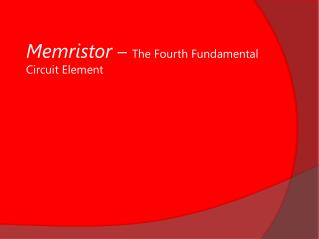 A from A to C - The illustration shows an open circuit. in order to close the circuit and turn on the light a piece of

Chapter 6: Printed Circuit Board Design - . example of a printed circuit board – front and back side. the course

FUNDAMENTAL 5 - . presented by mhs administration july 24, 2012. the formula for quality instruction. the fundamental 5.

Chapter 1 MAGNETIC CIRCUIT - . magnetic circuit. it is the path which is followed by magnetic flux. it is basically

Implementation of the Fundamental Five - . objective. to become familiar with the components of the fundamental 5 and to