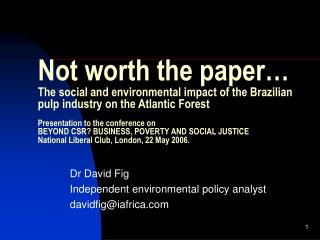 Not worth the paper… The social and environmental impact of the Brazilian pulp industry on the Atlantic Forest Presentation to the conference on BEYOND CSR? BUSINESS, POVERTY AND SOCIAL JUSTICE National Liberal Club, London, 22 May 2006. Dr David Fi g Independent environmental policy analyst Dr . Ada Ignaciuk , Agricultural Policy Analyst , - What are the most efficient measures of mitigation and adaptation to

Dr David Wilson Utah - Experienced Disorders Analyst - Dr david wilson has worked in utah for many years. he is a

IER as Policy Analyst - . study and analyze issues related to different aspects of the university purpose internal and