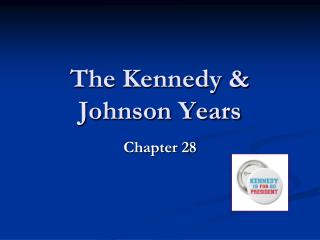 The Kennedy & Johnson Years. Chapter 28. Kennedy – The New Frontier. 1960 Presidential Campaign Republican VP Richard E. Nixon with Henry Cabot Lodge vs. Democrat John F. Kennedy with Lyndon B. Johnson. Election of 1960. Kennedy had to overcome:. Election of 1960. On his side John F. Kennedy and the Politics of Expectation - . with his new frontier program, kennedy promised to “get america

Maxims - . “knowledge is of two kinds. we know a subject ourselves or we know where to find information on it” (

Alternative Thread during the Kennedy and Johnson Administrations Special Education - . the presidential panel on mental

Chp 20.1 Kennedy and the Cold War - . quickwrite what are the qualities of effective leaders?. how can a leader motivate

Did Nostradamus predict the deaths of the Kennedy brothers? - . the quatrain. the great man will be struck down in the