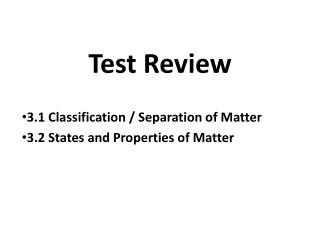 Test Review. 3.1 Classification / Separation of Matter 3.2 States and Properties of Matter. ANSWER KEY. 1. A mixture of sand and salt are most easily separated due to differences in their ___. . A) densities B) boiling points C) solubility D) magnetic properties E) mass.

Chapter 7 Test Review - . january 31, 2011 biology i . a person who has a disorder caused by a recessive allele is

Cell Test Review! - . cell theory includes all of the following except basic living unit of all organisms all cells are

Test Review – Periodic Table Unit 2 Section A - . use your periodic table to enter the symbol of the element for each

Final Test Review 2014 - . in regards to a motion graph, what does a horizontal line indicate? . no motion or at rest. in