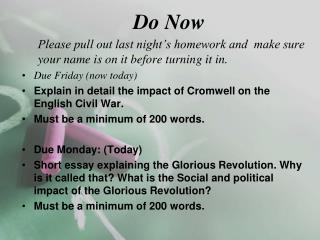 Do Now . Please pull out last night’s homework and make sure your name is on it before turning it in. Due Friday (now today ) Explain in detail the impact of Cromwell on the English Civil War. Must be a minimum of 200 words. Due Monday: (Today)