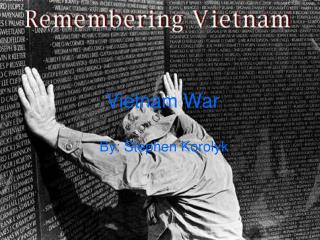 Vietnam War. By: Stephen Korolyk. Introduction. All parts of the Vietnam War Background about the war how it ended. Different names. Vietnam war Second Indochina War Vietnam conflict. About the war. It occurred at Vietnam, Laos, and Cambodia The Vietnam war. - The vietnam war. by: christian o’connell. i am going to take you to a time line through the past and