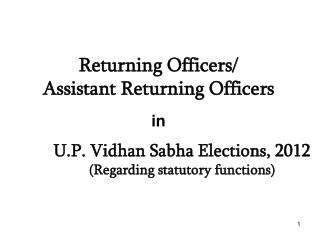 GUIDE TO RETURNING OFFICERS IN THE CONDUCT OF ELECTIONS - . introduction. returning officer (ro) and assistant returning

Returning Shopping Carts - . matthew 6:19-21. problems returning carts. too much trouble other things to do others do n

RETURNING HOME - . the challenge of reuniting returning citizens with their families and communities. a project of the