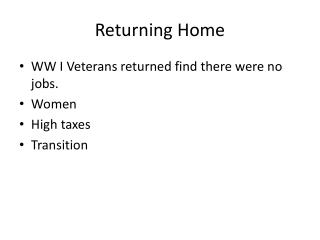 Returning Home. WW I Veterans returned find there were no jobs. Women High taxes Transition . Taxation. Pre 7% After 73%. The Red Scare. After the war there was a strong movement toward communism Unions began going on strike Seem as a microcosm of communism. TAV Chapter 17 . RETURNING HOME - . the challenge of reuniting returning citizens with their families and communities. a project of the

Returning home, but stepping back - . increasing access to sexual and reproductive health and hiv services for returnees

Returning to Your Home the First Time - . make certain your house is safe to enter. before entering the home. respiratory

RETURNING USERS - . you can now attach your investment grant application yourself. we have streamlined the process so

Returning To Teaching - . an evaluative case example of one cpd course. the background. the return to teaching course is

Returning the investment - . hesda’s response to the rewarding and developing staff initiative lesly huxley and bob