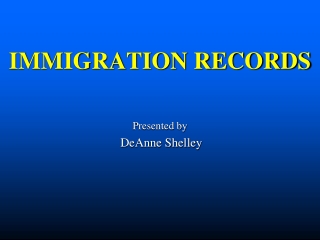 WHAT, WHY, &amp; HOW DO I SAVE TOWNSHIP RECORDS? - . records retention schedules and how to use them. who keeps the

Ellis Island - . &amp; other ports of entry throughout the history of the us. american immigration. the early days

Chapter 7: Immigration and Urbanization (1890-1910) - . era of immigration. immigration means moving into one country