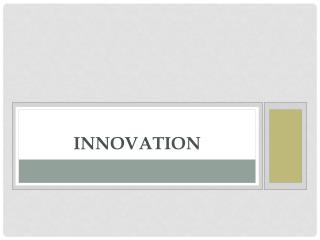 INNOVATION. Changes do not always have to be great leaps forward or involve radical new ideas. Most of the time change is more gradual, moving incrementally forward with a sequence of little, cumulative improvements. IT Innovation - . evaluating an innovation gp dhillon, phd associate professor of is school of business, vcu.

What is Innovation? - . presented by henra mayer innocentrix: ceo. presentation structure. what is innovation? why

Innovation - . innovation. 1) names of inventors and inventions a) henry bessemer better process for making steel b)

Mastering the Dynamics of Innovation by James M. Utterback - . summary by david e. goldberg university of illinois at

Community Building - Power Up the Grid - . behaviors we will target in the campaign: share your skills/talents: update