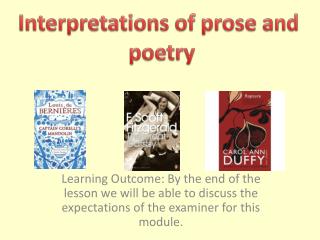 Interpretations of prose and poetry. Learning Outcome: By the end of the lesson we will be able to discuss the expectations of the examiner for this module. What is the module worth?. How will the module be assessed?. You will complete an exam that lasts for 2 hours and 45 minutes. Unit 3: Interpretations of Prose and Poetry - . an introduction miss mcclue. starter. learning objective. we are learning

Poetry and Prose - . by alee jakimowicz. what is the definition of poetry?. imaginative or creative literature in

Poetry and prose - . blank verse shakespeare wrote most widely in blank verse . this is a type of poetry that does not

Poetry, Prose, and Drama - . how do i distinguish among poetry, prose, and drama?. activator. what is it? see if you

Poetry, Prose, and Drama - . how do i distinguish among poetry, prose, and drama?. activator. what is it? see if you

Prose, Poetry, Paper - . textual transformation. warm up- day 1. turn and talk to your elbow partner about the following

Prose &amp; Poetry - . who’s in your little black book?. the event:. the performance of literature prose –

Finding Poetry in Prose and Prose in Poetry: Discrete Skills Heart of Darkness - . poetry. poetry vs. prose. prose . from

What distinguishes poetry from prose?

Prose, Point of View, &amp; Poetry Review - . compliments of the james madison center, jmu. all works that are

PROSE vs. PROSE - . what it was why it didn’t catch on what we did about it why it will work who’s committed to using