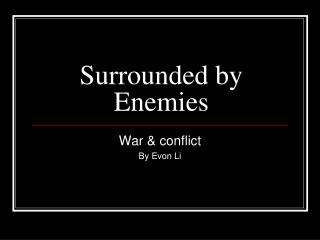 Surrounded by Enemies. War & conflict By Evon Li. Rome’s greatest enemies: The Visigoths The Cheruscans The Huns Carthage Pontos. Enemies: Rome. Hannibul of the Carthaginians. Enemies: U.S. The United States: Other countries around the world can be considered as rivals, not enemies Surrounded by Conflict - . by: hannah anderson, dayna ankermann, and sam couillard. enemies of rome. these basic

The Surrounded - . by d’arcy mcnickle. biography. born on january 18, 1904 in st. ignatius, montana on the flathead