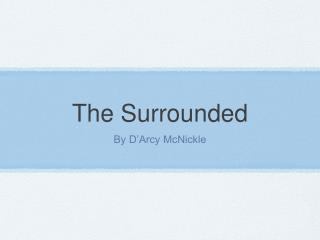 The Surrounded. By D’Arcy McNickle. Biography. Born on January 18, 1904 in St. Ignatius, Montana on the Flathead Indian Reservation. Surrounded by Conflict - . by: hannah anderson, dayna ankermann, and sam couillard. enemies of rome. these basic

The Enemy Has Surrounded the Castle— Is It Time to Develop a Plan? - . dr charles p pfleeger cissp 