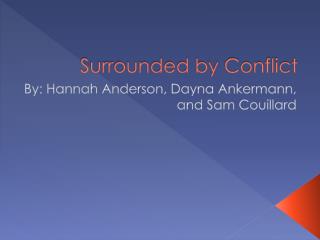 Surrounded by Conflict. By: Hannah Anderson, Dayna Ankermann, and Sam Couillard. Enemies of Rome. These basic categories of the enemies of Rome have lead Rome to its eventual decline and added diversity of cultures to their civilizations. Carthage.

The Surrounded - . by d’arcy mcnickle. biography. born on january 18, 1904 in st. ignatius, montana on the flathead

Conflict created by Industry - . explain why there is competition for land conflict between different land uses around

Conflict by the Numbers: From conflict to war - . conflict is a disagreement or argument between to people or countries.