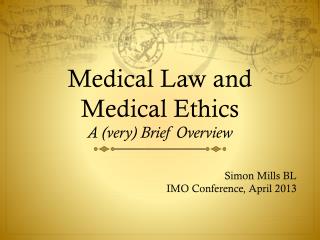 Medical Law and Medical Ethics A (very) Brief Overview. Simon Mills BL IMO Conference, April 2013. Linking Law and Ethics. Law floats on a sea of ethics Judge Earl Warren [ C]onscience is the guardian in the individual of the rules which the community has evolved for its own preservation. Medical Law &amp; Ethics - . ethics is a voluntary self imposed conduct by the medical profession. duties of

Medical Ethics - . advancement in medicine creates new problems. medical ethics. how will the recipient of an organ be

Medical Ethics - . learning objectives:-  to understand the nature of medical ethics in terms of both beginning life and

Medical ethics - . introduction to basic principles. ethics are not …. ethics is not the same as feelings ethics is

Medical Ethics - . introduction. the origins of the field and its current status. the beginnings: a) the nuremburg code,