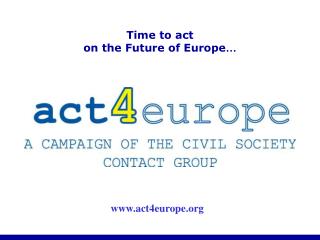 Time to act on the Future of Europe …. www.act4europe.org. Overview. The why and how of ENGOs EU Institutions and their relevance Constitution Process Participatory Democracy. Why is the EU relevant for NGOs. Impact: the Hungarian village’s relevance. Future Tense - . we can use the simple future tense :. when we predict a future event or situation , e.g. i think that

Europe &amp; the Future of Languages: the case of Spanish - . clare mar-molinero centre for transnational studies

Future Time - . shihab uddin ahmad. definite arrangement. we use the present continuous to talk about definite

How to Approach the future? - . jan-evert nilsson blekinge institute of technology. the dilemma of policy-making.

The Arrow of Time - . lecospa group meeting 19 october 2010. the arrow of time. the past is different from the future.

Generation E: Europe in the Future/Europe as the Future - . social agendas and the future. who is generation e?.

The Idea of Europe - . stephen brill. preliminary. europe is both united and divided at the same time it’s hard to

The Future of HR in Europe: Key Challenges through 2015 - . most important topics. cluster. recruiting and staffing.

The Future of Corporate Takeovers in Europe - . ecgi session at the federation of european securities exchanges' 6th

State of the Union “ What does the future hold for statistical computing in Europe ” - . october 2012. agenda.

How to express future with “GOING TO” - . we use going to to show that something will take place in the future… not