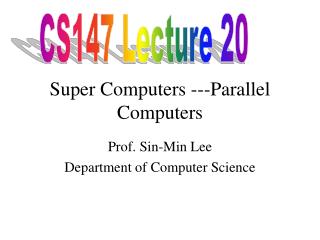 Super Computers - . by phuong vo. what is a supercomputer?. supercomputer is a broad term for one of the fastest computer

Super computers - . by: lecturer aisha dawood. principles of message-passing programming . the logical view of a machine

Parallel Computers - . chapter 1. the demand for computational speed. introduction there is a continual demand for