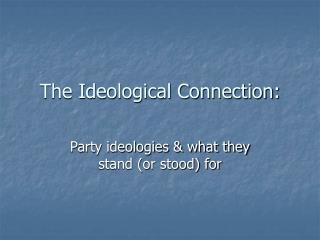 The Ideological Connection:. Party ideologies & what they stand (or stood) for. Reminders:. Paper topics due Tuesday, February 3rd These should contain: A brief statement of the topic as you propose to define it A preliminary bibliography of sources you are likely to use What would William Osler think of Clinical Education in Japan today? - Why this topic? osler - canada connection osler -