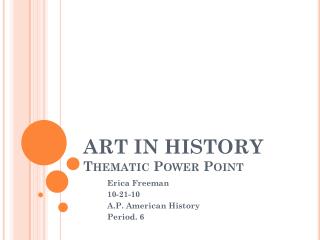 ART IN HISTORY Thematic Power Point. Erica Freeman 10-21-10 A.P. American History Period. 6. Chapters 1-3. By an Aztec Artist In simple colors of almost no verity Shows a man using a tool to dig out a crop The man is only wearing a loin cloth Jeopardy Art Jeopardy Power Point - Each player must select the celebrity artist he or she would like to be. ... an art

Video in Power Point - . objective able to insert video in power point able to make video play by itself able to change

A History of Guerilla Art - . by alex radivoyevich. goal and thesis. to show you a brief history of guerilla and street

Aztec Art - . by: daphne . *pottery was a religious craft for the aztecs. *it was not useful for them though. * aztecs