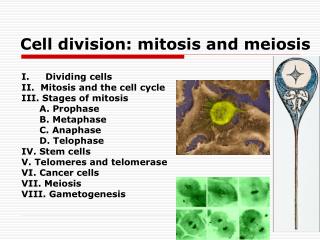 Reproduction - . asexual sexual mitosis and meiosis. reproduction. a species is a group of closely related organisms that

Mitosis - . how do living things grow and repair themselves?. why do cells divide?. reproduction growth repair. the cell

CHAPTER 10 CELL GROWTH AND DIVISION (page241) - . *-cells cannot grow by simply increasing in size because of a limiting

Lord of the Cell Rings and the - . division of middle cell. journey 1 : fellowship of the cell ring. what is the longest

Today’s Agenda: - . journal question : what is a chromosome? *1. lecture : introduction to chromosomes, mitosis

Comparing Mitosis and Meiosis - . mitosis is a conservative process that maintains the genetic status quo in contrast,