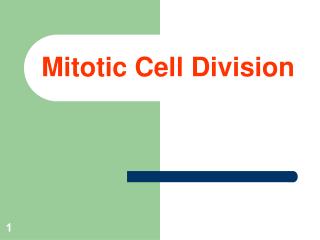 Mitotic Cell Cycle Review - . take out a sheet of paper and write down questions 1-20. . 1. what are the stages of the

Cell Division - . predict. are the following statements true or false? ___ unicellular organisms can reproduce by cell

Cell Division - . chapter 9. why do you think cells in all plants and organisms need to divide? to replace damaged tissue

Cell Division - . day i. cell division: mitosis &amp; meiosis. the process by which two cells are formed from one.

Cell Division - . reproduction . how do organisms grow?. they increase both in size by increasing both the number and