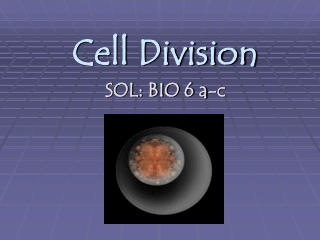 Cell Division - . chromosomes. are made of dna each chromosome consists of sister chromatids attached at a centromere.

Cell Division and Mitosis - . chapter 10. 10.1 the cycle of cell growth and division: an overview. the products of

Chapter 10 Cell Growth and Division - . limits to cell growth. the larger a cell becomes, the more demands the cell

Eukaryotic Cell Division - . occurs by mitosis q: what type of cell does mitosis occur in? a: somatic cells or body cells

Biology is the only subject in which multiplication is the same thing as division… - . chapter 12. the cell cycle:

CELL DIVISION - . before it divides? what causes it to divide? what controls the division?. cell cycle. determines

THE CELL CYCLE and CELL DIVISION - . think about it… why do cells stay small?. dna overload = limit to cell growth. the

Genetics - . in this type of cell division, one cell divides into two daughter cells that have the same chromosome number