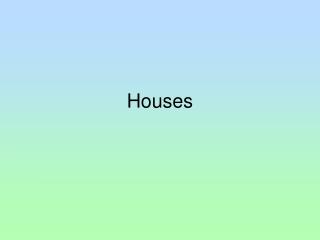 Houses. Folk ecology. Folkways involve more than merely cultural adaptation They are not enslaved and wholly shaped by their physical surroundings Not necessarily true that they live in close harmony with their environment Houses - . a vocabulary activity. let ’ s practice !!. place the correct definition next to each word. a large country

HOUSES - . i n t e r a c t i o n. a you are getting married very soon and you are looking for a place to

Houses - . what we live in. different houses . glass wood stone hay brick cloth canvas metal . where some can be located

Building Houses. - Building houses. building hope. join the team!. what we believe. everyone has the right to live in

Ceramic Houses - . vocab. slab – a large flat piece of clay rolled out by a slab roller or a rolling pin coil – rope

Hundertwasser Houses - . when you think of buildings and houses what do you imagine? . could this be a real building? .