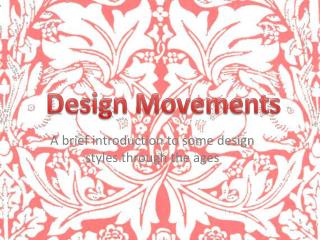 Design Movements. A brief introduction to some design styles through the ages. Impressionism. Characteristics of Impressionist paintings include visible brush strokes, open Composition, and emphasis on light and its changing qualities. Design movements - . lesson objective – to understand the transition from crafted products to mass production, and the

THE DESIGN OF INTELLECTUAL MOVEMENTS - . stuart umpleby the george washington university washington, dc. how i became

Movements - . flexion-extension. flexion - reduces the angle between two bones at a joint. usually a sagittal plane

MOVEMENTS - . -movement around a joint may be around any one (or more) of three axes -most movements are found in pairs

Peace Movements - . as the war progressed, a number of groups &amp; individuals attempted to arrange a peace. they

Reform Movements - . questions to consider. what do reform movements have in common? where do the reformers get their

Poetic Movements - . the schools of poetry defined by grouping poets who share similar styles of writing poetry. they can

Peace Movements - . acts 11. the emerging peace. acts 9:31  so the church throughout all judea and galilee and samaria

Mandibular Movements - . anatomy and physiology of the temporomandibular joint. a close up view of the joint. basic

MUSCLE MOVEMENTS - . how do muscles work and create movement?. muscles turn energy into motion everything you do is

Muscle Movements - . abduction vs. adduction. abduction – moving your arm or leg away from the center line of your body