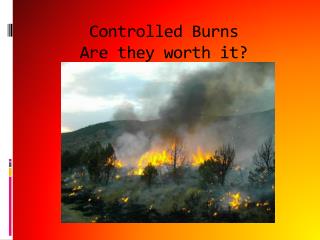 Controlled Burns Are they worth it? . Breaking News Do Not breath. Why? Prescribed Burns !. Wood smoke that comes from prescribed burns is 12 times more Carcinogenic than cigarette smoke ! The Net Worth of an Object-Oriented Pattern - . practical implications of the java rmi. adrian german lecturer, computer

COLLEGE BOWL 2010 - . rules. questions. nine different categories each round has 18 questions. first round questions are

Electrical Injuries/Burns - . case-based presentation 5 february, 2009. when is electricity not your friend?. 45 year-old

Purpose of the Presentation - From conservation… …toward sustainability presented to: ashrae , fort worth chapter

Kinetically Controlled Combustion Phenomena - . categorisation of combustion phenomena. most of the practical combustion

To a Mouse - . robert burns. purpose of the poem. “written by burns after he had turned over the nest of a tiny field