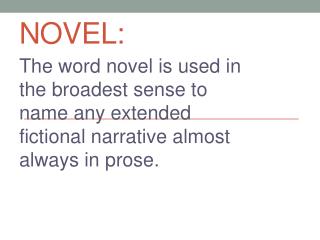 Novel:. The word novel is used in the broadest sense to name any extended fictional narrative almost always in prose. Why do we read Novels?. The Novel - . rising from the mists of the imagination and time. not, as was once thought, a european invention. we

NOVEL Databases - . your name your school date. a presentation for elementary school teachers and

The Novel - . historical significance. the use of a specific time period in historical fiction, in which the actions of

Novel teams - . mrs. kelly brown the outsiders by s.e. hinton. what do we do each day?. 1. everyone gets a book and opens

NOVEL Databases - . a presentation for high school teachers and administrators. your name your school