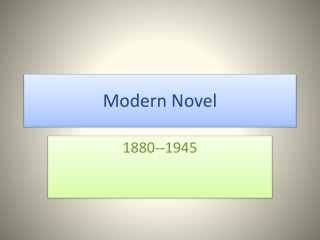 Modernism and Modern Novel - . modernism: the

Amelia E. Barr, ‘The Modern Novel’ - . it is the erotic-sensational novel which deserves unqualified anger and

Novel: - . the word novel is used in the broadest sense to name any extended fictional narrative almost always in prose.

The Red Badge of Courage The First Modern War Novel - . about the novel. the story of henry fleming a “youth” who